When the Beer Marketing and Tourism Conference rolled into Burlington in March 2018, we were clearly in the presence of movers and shakers in a variety of artisan industries. Of course there was beer – it’s why we were there, but we were all educated about several other important handmade food products Vermont is known for, and we’re not just talking about maple syrup!

During the first conference lunch, we were graced by a delicious beer and cheese pairing featuring Cabot Cheese and Long Trail Brewing.

Following this delicious pairing, we were served up a lunch courtesy the staff at our host hotel, DoubleTree by Hilton. Alongside lunch were a plethora of Vermont beer choices, including offerings from von Trapp Brewing, 14th Star Brewing, Drop-In Brewery, (more from) Long Trail Brewing, and Harpoon Brewery.

So just how big are the beer and cheese industries in Vermont? Well, Vermont is number one in the country for breweries-per-capita, and its wholesale side is worth over $300 million annually. The Vermont brewery scene contributes $271 million to the Vermont economy, supports over 1,500 jobs, and brings in over a million tourists.

For Vermont cheese, we have to look at it in a larger context, specifically as it relates to Vermont’s dairy industry. Dairy annually accounts for 70-80 percent of Vermont’s agricultural sales, making it the number one state in the United States in its dependency on one commodity. Additionally, Vermont currently produces 2.3 billion pounds of milk annually from 135,000 dairy cows on about 1,000 dairy farms and the state ranks 16th nationally in milk production.

For Cabot Creamery, which is a co-op, it depends on over 1,000 family dairy farmers throughout New England to supply dairy for its cheese. Part of the creamery’s accolades include that Wine Spectator listed Cabot cloth-bound cheddar as one of “100 great cheeses” of the world in 2008. Also that year, Cabot Monterey Jack received an award from the American Cheese Society.

It is clear that beer and cheese not only pair well together, but together they are strong cornerstones of Vermont’s dedicated foundation to eating local, sourcing local, and building up local industries. 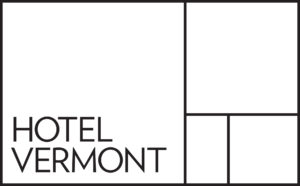 Hotel Vermont is pulling out all the stops, and the sheets, and the glassware, and gastronomic delights, as they are hosting a unique Beer Pairing Dinner in conjunction with the Beer Marketing & Tourism Conference in Burlington.

So just what is this incredible dinner and Hotel Vermont all about? The dinner is the collective brainchild of Hotel Vermont’s Beer Concierge Matt Canning and Executive Chef Doug Paine, who thoughtfully paired some of Vermont’s most sought-after beer with the best seasonal and creative dishes available. This five course meal will include dishes inspired by ingredients and techniques used in brewing alongside beers ranging a full spectrum of styles and flavors. The evening will include a discussion about the history and furture of Vermont beer culture and tourism, with special guests appearances from some of our favorite Vermont brewers!

And there is no better place for this to happen than at Hotel Vermont, an independent, community-focused hotel right on Cherry St. Hotel Vermont opened in 2013 as Burlington’s only independent community based hotel and over the past five years it has been recognized as one of the country’s premier destinations for beer tourism, as highlighted by the Beer Concierge Program.

Tickets for the beer dinner are still available. Here’s the menu:

We are very excited to announce that Doug Campbell, President of Brewery Ommegang, will be the opening keynote speaker at the 2018 Beer Marketing & Tourism Conference (BMTC) in Burlington, Vermont, taking place March 6-8. Mr. Campbell’s talk is scheduled from 10:55 – 11:40 AM on Wednesday March 7.

“We know our attendees are eager to hear from Mr. Campbell,” says Ryan Newhouse, Marketing Director for Zephyr Conferences’ two annual craft beer conferences. “He is a 13-year beer and spirits industry veteran and is now in charge of a Belgian-style brewery that turns 21 years old this year. But also pertinent to our audience is the fact that Brewery Ommegang is a “beercation” destination, hosting everything from big-name concerts to an annual summer fest, Belgium Comes to Cooperstown, which draws over 3,000 attendees and 100-plus breweries from around the world.”

“Beer tourism is important to the bottom line of many businesses, not just breweries.” Newhouse says, “Annually, the average craft beer drinker visits 3.5 breweries near their homes and 2.5 breweries within two hours‘ drive, and 1.6 percent of craft beer drinkers take 10-plus trips each year to breweries that are over two hours’ drive. The impact increases when you start factoring in where those people eat, sleep, and if they likely hire tour companies to be shown around.”

Other speakers at the Beer Marketing and Tourism Conference in Burlington, Vermont, include Julia Herz of the Brewers Association, Wendy Knight of Vermont Department of Tourism and Marketing, and Christopher Shepard of Craft Brew News / Beer INSIGHTS.

In addition to three days of incredible content, registration to BMTC includes access to one of the three-hour Summits, two lunches, two beer socials, and optional beer dinners and excursions. See the full agenda here.

The inaugural conference took place this past March in Asheville, North Carolina with 242 industry attendees from throughout North America and the world. Attendees included representatives from breweries, tour operators, brewery guilds, destination management organizations, beer bloggers, and the press from as far away as the UK, Ireland, and Australia.

The need for a beer marketing and tourism conference was confirmed at the first event. While the craft beer industry has experienced a decades-long boom, times have changed. There are now over 5,300 breweries in the United States alone and yet the double digit growth rates craft beer had experienced are now gone. This means increasingly intense competition for visitors at tap rooms and shelf space in retails stores.

We are extremely pleased to be taking the conference to Burlington and Vermont. Most of us in the industry already know Vermont ranks 1st in breweries per capita among US states. Vermont is also well known as a tourist destination thanks to its wide-open spaces, excellent skiing, agricultural products, and beer.

We have received outstanding support from the Vermont community, especially the Vermont Department of Tourism and Marketing and the Vermont Convention Bureau, which are hosting us for two lunches and a reception – included in the registration price. We will also be adding pre-conference and post-conference excursions for attendees.

If you are interested to pour your beers for your fellow attendees, we have two options for you. Staffing a booth at the Expo costs only $500 ($400 if you select this when you register) and is free to non-profit or governmental brewery guilds and DMOs who register for the conference. And breweries and others can participate in Live Beer Social for only $200 in which sponsors have five minutes to pour a beer for a table of attendees as they record their thoughts via Twitter, Facebook, Instagram, and more, reaching approximately 70 participants in 10 rounds.

Registration is open now and prices increase as we get closer to the conference date.